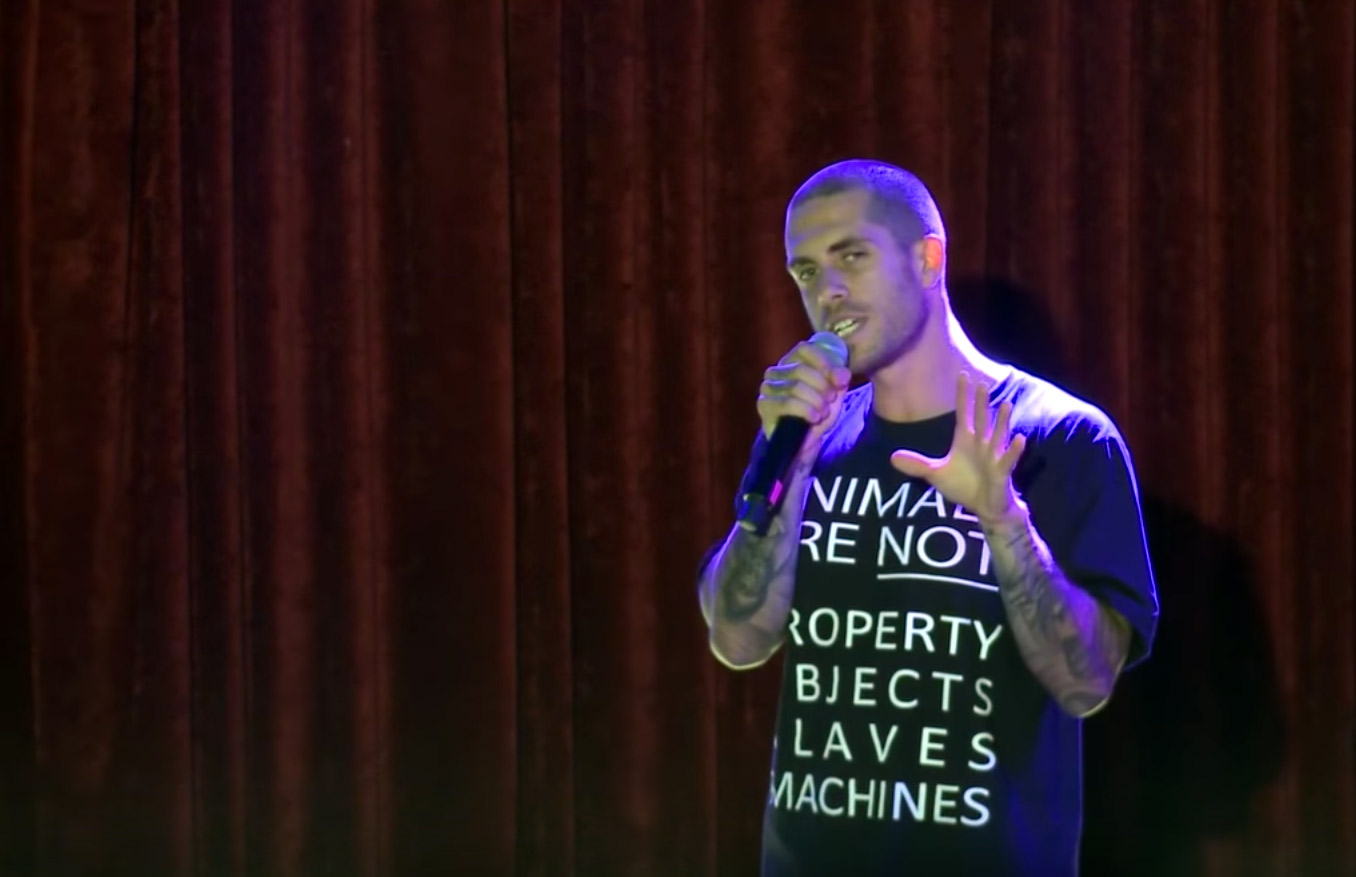 Since becoming vegan, I’ve listened to many thought-provoking and poignant animal rights speeches on YouTube. But there are really only a handful that have stuck with me throughout the years and that I keep returning to to watch or listen to again and again. I know I’m not alone, because they’re some of the animal rights and vegan talks with the most views on YouTube. So what is it about these speeches in particular that makes them so compelling?

Well, first and foremost, they’re delivered by talented public speakers who know how to draw in the audience, make people laugh, keep the tone relatively light despite the difficult subject matter, and tell engaging stories while relating profound truths. But the most potent quality that really makes their talks stand out is the passion with which they speak out on behalf of the animals, which in turn inspires the listener or viewer to care about the topic as well.

Below you will find a collection of incredibly powerful animal rights speeches. They’re not particularly graphic, but they will pose difficult questions that might make you uncomfortable. I would suggest that you hear them out, despite how uneasy they might make you feel. It’s actually a positive thing that we feel discomfort when hearing about animal rights issues – because it’s a sign that deep down we do have compassion for the animals. As resistant as we may be to exposing ourselves to the truth initially, when we open our eyes, ears, and hearts to their suffering, we liberate ourselves from ignorance and thereby empower ourselves live in alignment with our values.

James Wildman of the Animal Rights Foundation of Florida opens his talk to a group of people at Sublime Restaurant in Fort Lauderdale with the premise behind The Matrix. For those who aren’t familiar with The Matrix, The main character Neo, played by Keanu Reeves, is presented with two pills: a blue pill or a red pill. If he takes the blue pill, he’ll go to sleep and the next day it will be like nothing happened; he can go back to his normal life. If he takes the red pill, he’ll finally learn the truth. “I’m here today to give you that red pill,” Wildman says. Combining humor, brilliant insights, and hard-hitting truths, Wildman delivers a dynamic and riveting presentation. As one of the most viral YouTube videos on animal rights, this speech has catalyzed an awakening for viewers around the world, converting many to veganism overnight.

Philip Wollen: Animals Should Be off the Menu

“I heard the screams of my dying father as his body was ravaged by the cancer that was killing him and I realized I’d heard those screams before: in the slaughterhouse, their eyes stabbed out and their tendons slashed, on the cattle ships to the middle east, and the dying mother wale as a harpoon explodes in her brain as she calls out to her calf. Their cries were the cries of my father.” This is how former Citibank executive Philip Wollen begins his electrifying speech for the debate Why Animals Should Be off the Menu. Short, incisive, and moving, Wollen’s speech gives a simultaneously sweeping and compact summary of the social, economic, moral, philosophical, health, and environmental problems caused by killing animals for food.

Dr. Will Tuttle Live in Australia 2014

Author of the deeply profound book The World Peace Diet –  which many, including myself, consider to be the one of the most important books of the 21st century –  Dr. Will Tuttle speaks with kindness, compassion, and wisdom about the sacredness of food. We learn that our food choices have a ripple effect that impacts the entire world, triggering a chain reaction that may just boomerang right back to us.

He explains that we are a part of an interconnected web of life; nothing exists in vacuum. In accordance with the golden rule, when we sow seeds of confinement, exploitation violence, obesity, and premature death in the animals we raise for food, we reap similar situations and circumstances for ourselves. Through Dr. Tuttle’s talk we see that because food is a central metaphor for life and signifies our connection to the rest of the living world, peace must begin with our plates.

Dr. Tuttle also performs a few beautiful pieces of piano music inspired by nature that he composed, which reinforce his talk’s emphasis on the interconnectedness of all life on the planet.

This is a shorter, interview-format discussion in which Dr. Tuttle explains the principles within the World Peace Diet, accompanied by music and images.

“We tend to assume that only vegans and vegetarians follow belief system, but when eating animals is not a necessity– which is the case of much of the world today – then it is a choice, and choices always stem from beliefs.” Dr. Melanie Joy spent years studying the psychology of eating animals for food, and why as a society we have learned to exclude livestock animals from our moral consideration, despite the fact that it conflicts with our values of compassion and justice. What emerged was a paradigm she labeled carnism – the invisible belief system or ideology that conditions us to eat certain animals. In her talk, Dr. Joy discusses the “3 Ns” of justification for eating animals: that it’s Normal, Natural, and Necessary, drawing parallels between our use of animals and other forms of oppression such as slavery and male dominance.

James Aspey – This Speech is Your Wake Up Call!

After many hours of meditation, James Aspey decided to make a vow of silence for 365 days and travel around Australia to raise awareness for veganism and animal rights. This speech, given  shortly after breaking his year of silence, explains what led Aspey to go from being a meat eater who was apathetic about the plight of animals to becoming an ardent animal rights activist. It also provides helpful guidance to others about how to advocate on behalf of the animals. In a down to earth, warm, and understanding tone, Aspey drops many truth bombs including:

“All use is exploitation. All exploitation is a form of abuse. And all abuse is immoral.”

“Since when was it extreme to not to want to harm animals? When did that become extreme? What’s extreme is saying we love animals and we’re against animal cruelty while we pay people to mutilate and torture and slaughter animals for foods and products we don’t need. That’s extreme.”

Carl Safina at Mission Blue II: What are Animals Thinking and Feeling?

In his warm, down to earth, and at times humorous talk, ecologist Carl Safina explains that nonhuman animals are much more complex than we generally tend to think they are. Drawing upon fascinating stories about various sea and land animals, along with scientific data, he conveys how similar the brains and behavior of other animals are to our own. He also points out that we have a tendency to be dismissive of the consciousness they possess and to act callously towards them, reminding us that humans are the most extreme among species. Aptly summing up humanity’s contradictions, he states: “We are the most compassionate, most violent, most creative and most destructive animal that has ever been on this planet, and we are all of those things all jumbled up together.”

Safina accounts for some of the ways we are driving other species to extinction, ending with a moving question and call to action: “Are we capable of using what we have to care enough to simply let [animals] continue?”

Bold, authoritative, uncompromising. Professor Gary Francione – the first person to ever teach animal rights law at a university (Rutgers) – says that “animals should have at least one right, and that is the right not to be treated as property.” To this end, he believes that animal rights advocacy should center exclusively around promoting veganism as the moral baseline, with the idea that all other animal exploitation will resolve itself once we start addressing the greatest way in which we abuse animals: raising them for food.

His arguments are simple yet profound, and expressed with such clarity that it’s hard not to agree with him, or at the very least see where he’s coming from. While I myself am not against the single issue campaigns (SIC’s) he speaks of per se, I agree with him that our activist work should be focused mainly on getting people to go vegan, because then they will eventually come to see all forms of animal exploitation as wrong.

Why Vegan? Lessons from an Animal Scientist – Jonathan Balcombe – Vegetarian Society of Hawaii

A vegan biologist specializing in animal behavior, Dr. Jonathan Balcombe has devoted his life’s work to investigating the complex inner lives of animals and spreading awareness about the ethical imperative of treating animals with sensitivity and respect.

Dr. Balcombe explains that the speciesist lens through which we view animals leads us to underestimate their intelligence and ability to experience a wide range of emotions. In an effort to uproot our common misperceptions about animals, Dr. Balcombe tells stories about various kinds of animals exhibiting grief, joy, and pleasure, and demonstrating sophisticated intellectual capabilities.

Towards the end of his engaging talk, Dr. Balcombe touches on “the most dangerous weapon on the planet” – the table fork – which conveys into our mouths animal products that can kill us, are destroying the planet, and of course involve cruelty towards animals.

Simone Reyes is a passionate animal rights activist who sums up her journey to becoming vegan and a voice for the voiceless in her TED talk (longer version of similar talk here). During her genuine and heartfelt presentation, Reyes explains how she began caring about animal rights and eventually came to the conclusion that: “I could no longer live in peace while there was being a war waged against animals. I could no longer feel full while they’re being starved or feel warm knowing that they’re being enslaved in cold cages. I couldn’t feel safe while they’re brutalized. And I certainly couldn’t feel free while they are still oppressed.”

Best Speech You Will Ever Hear – Gary Yourofsky

I would be remiss if I didn’t include Gary Yourofsky’s presentation, as many consider it the most impactful speech about animal rights. Though I find his approach to be a little intense and aggressive for my own sensibility, many others have found it to be very persuasive. Veganism is spreading like wildfire in Israel where Yourofsky gives most of his talks, and thousands of people credit him with convincing them to go vegan.

Examining difficult and taboo subjects such as animal rights requires that we keep an open mind. I personally believe that the main reason that I was able to be receptive to the animal rights message and eventually become vegan was my willingness think outside the box.

All of the speakers included above are going against ingrained cultural beliefs and behavior by speaking up on behalf of animals and encouraging others to go vegan. And though each talk is a unique, the overall gist is the same: we need to expand our compassion for animals, we need to move away from using them as resources, and we need to be their voice. It may not be a message that we want to hear, but it’s necessary for ourselves, the animals, the planet, and future generations that we do hear it.

If you take the time to sample a few of these talks, my hope is that you will find at least one that speaks to you.